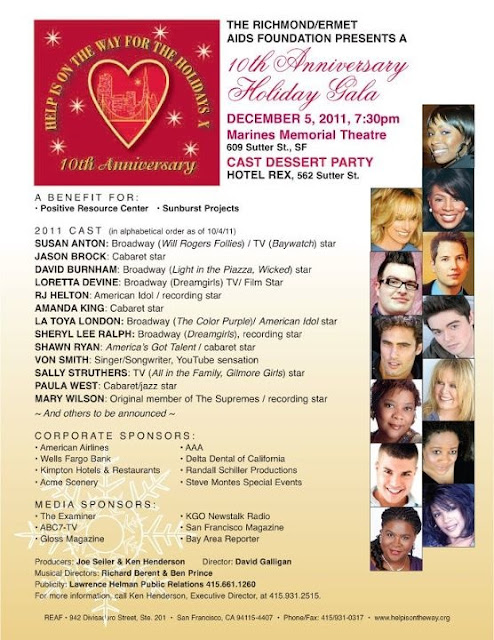 ANOTHER LAVISH REAF BENEFIT TONIGHT AT THE MARINES MEMORIAL THEATRE

Have you ever attended one of these shows? If so then you know about these splendid talented singers, actors and musicians. If not – then you sure will want to not miss this show.

I have seen every one of these shows over the years, and I am always thrilled with the talents…THE BEST IN THE WORLD! The talent includes entertainers from Film, TV, Recording, Jazz and Dance in this 10th Anniversary Holiday Gala.

O.K. Now you know, that this will be a star-studded benefit concert and gala with Mary Wilson (The Supremes), Sheryl Lee Ralph “Dreamgirls”, La Toya London (American Idol star) and Bonnie Franklin (TV Star and performer) – they and the entire cast, literally take over the stage. Fabulous!

Here’s a little back-story. Years ago Bonnie Franklin (T.V. Star and Performer) – was at the once famed Mocombo in SF. I was set up to do a pre-performance with Franklin at the Holiday Inn on Van Ness. When I got to the Hotel Bonnie Franklin had this little dog that she called “Toto” – you know, like the one from The Wizard of Oz. Cute doggy, but it tried to bite my butt. “Toto” (cut as ever) -- even raised his leg and tried to pee on my leg.  Just like in the Wizard of Oz – where is the bicycle with the basket? Remember the line for OZ? -- "I'm gonna get you and your little Doggie too!" It sure could have come in handy. Toto would have loved the ride. I think. At least I would have.

This 10th Anniversary Holiday Gala promises to be the most electrifying and one of the years best.

Don’t go away – Here’s more: Broadway Star David Burnham will take your breath away – Sally Struthers of TV Fame will bring some humor along – Another famed Idol Star RJ Helton and TV’s “America’s Got Talent Shawn Ryan is always a great treat.

Cabaret stars that will brighten the Holidays are Paula West, Jason Brock, Amanda King, Wesla Whitfield & Samantha Samuels. From You Tube is Von Smith. You’ll love the musical comedy duo “Dakaboom.” Oliver Freeston (Principal Dancer from Company C Ballet) will amaze you. And the long waited cast of “Xanadu” will be at the Marines stage. They are opening at the NCTC on Van Ness.

TOMORROW: …LOOK FOR THE INCREDIBLE AND FUNNY "GOLDEN GIRLS REVIEW" -- AT" THE VICTORIA THEATRE