VERY WARM FOR MAY- MUSICAL GOLD ALL THE THINGS YOU ARE is the big hit song in the musical “Very Warm for May.” Introduced in 1939 on Broadway – it didn’t last very long. Alas, it was a Broadway flop. Flash forward to 2010. It took that long – but now with the cast of 42nd Street Moon Theatre it is now a wonderful, fun and hilarious show. In the current version at the Eureka Theatre they have restored much of the show that was cut along the way. Here are some of the great songs: “All The Things You Åre” – sung with a great arrangement from the original. Other musical highlights are “All in Fun” – “In the Heart of the Dark – Heaven in My Arms, and That Lucky Fellow. The story is a little complex. But 42nd Street Moon has a blast with the Barnyard show. The director of the show in the play is bent on being esoteric. He has visions of taking a simple show and making it into something that makes no sense and never ends. It’s a rare treat to bring this rare musical to life again. The Jerome Kern/Oscar Hammerstein legacy lives on to entertain us again. And thanks to 42nd Street Moon for bringing us this rare musical comedy. It’s superbly paced, cleverly plotted and totally absurd. The musical intentionally puzzles but pleases to no end. And then there is the camp, inching close to being somewhat gay. Of course, there is a missing person.  A well-known producer is trying to find her. Everywhere you look -- there is love in the air, and in the end – they sing their hearts out.   He’s back! That would be Bill Fahrner – a seventeen-year veteran of many Moon shows, plays with abandon a very erratic, over the top director (Ogdon Quiller). In the Broadway show Eve Arden was Winnie Spofford, the patroness of the Ogdon Quiller Progressive Playshop. This role is played and sung by the incredibly accomplished Maureen McVerry. Peter Budinger is excellent as the ex-boxer who is also a theater critic. Anil Margsahayam who has been with the Oregon Shakespeare Festival in Ashland for two years is back. In this play he is successful Broadway director (Johnny Graham) who is looking for his missing Sister May (Megan Hopp). She is great at hiding out. Vaudevillian Will Graham (Jeremy Vick) is absolutely fabulous. Also giving terrific performances are: Sarah Kathleen Farrell, Luke Chapman, Robbie Cowan, Michelle Ianiro, Alexandra Kaprielian, Zachary Franczak, and Jimmy Robertson. This is a sly, adroit and joyous musical. “A Must See!” DIRECTED BY GREG MacKELLAN (Superb!) Musical Director. G. Scott Lacy & Dave Dobrusky (Great!)  Choreographer Zack Thomas Wilde (Fantastic!) RATING: FOUR GLASSES OF CHAMPAGNE!!!! (highest rating) –trademarked- (((Lee Hartgrave has contributed many articles to the San Francisco Chronicle Sunday Datebook and produced a long-running Arts Segment on PBS KQED)))Follow Lee:  http://www.facebook/leehartgravehttp://www.twitter/leehartgrave
http://www.beyondchron.org/www.beyondchron.org.
Posted by Unknown at Wednesday, May 19, 2010 No comments: 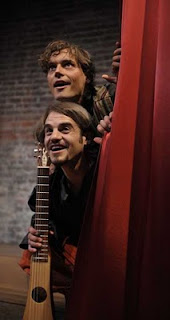 Queens, Kings and all those things unfold like a mystery. Secrets are everywhere from the moment the play opens with a big giant that caresses a young man’s body. It’s like the “Wizard” in the Wizard of Oz. We only see hands behind the moon lit face with those comforting arms. What is the wisdom that this astonishing creature is passing out? Ah, but you can’t have everything just yet. There is more to this play within a play than even a Wizard can't tell you all at once.

But, you will enjoy this meticulous and driving account about a Queen and King. Like a big windup clock that stops and starts you go down remarkable gripping and searing pathways. Who can a Queen trust? This is a question that you will try to figure out. But in this splendid specimen of the genre you will be led eagerly along this sly satire of celebrity, consumerism and High class and Lower class.

O.K before you get all wrapped up in tinsel – I will try to tell you the story. It’s about an acting troupe that travels from town to town to entertain. There is an evil Queen who wants the powers of the towns major Wizard. He agrees to teach her how to do a few tricks – but he forgot to mention that he has a sneaky way of giving her a reverse trick.

Later a King is looking for a consort. He gets one, but she is not exactly what he thought she was, even though her appearance strikes the King as a Godsend. They start negotiating details.

There are several stories/playlets told by a roaming troupe of actors. Ten Actors become many different characters that range from good guys to bad guys, magic and even a talking fish. It’s a pretty long play, especially the last act where they talk about making changes to the play. Maybe a little editing would help move it along. But that is a minor complaint. The cast of ten is astonishing. They are superbly absurd and watching them is a special pleasure. They are a blast of energy.

This World Premiere is based on the stories of Author - Peter S. Beagle.

THE OUTRAGEOUS AND FUNNY DIRECTOR AND PLAYWRIGHT IS STUART BOUSEL.