LEE HARTGRAVE TONIGHT
WALLIN & BARRETTA AT THE FAMED RRAZZ ROOM
The glory years of music have a new life with a tribute to the Italian Singers. This group is one of the most requested singers with their sumptuous presentation of songs from the greats like Frank Sinatra, Dean Martin, Tony Bennett, Perry Como, Louie Prima, Bobby Darin, Frankie Avalon and others.
Now, get this. This show is not imitating these great guys – they are giving a wonderful treatment to the songs that were associated with the stars of yesteryear.  Rick Barretta sez -  “I love that era of music. We’ve been doing this for fifteen years – and we never get tired of it.”
The two fantastic singers have played Las Vegas nightspots and traveled around the nation to Monterey, Palm Springs and Walnut Creek, where they were greeted with amazing enthusiasm. The songs that they sing are the most glorious times from music. “These are songs that are never forgotten” – says Rick. And, I agree. "The music today will never approach the longevity that the music from the Great American Songbook has" - Rick enthused.
In between the classic songs the guys joke around a bit, but they never forget that they want to deliver solid vocal performances. And they are supported by the terrific local wonder -  Kelly Park and his Quartet.
You’re gonna see plenty of Frank, Dean and Al Martino. All great singers. I’ve been lucky to have met each one of them – and will never forget their impact. And I am lucky that singers like Wallin and Barretta can bring back those wonderful years to us. And I can’t wait to see their show this evening at The Rrazz Room.
http://www.therrazzroom.com/
(((Lee Hartgrave has contributed many articles to the San Francisco Sunday Datebook and produced a long-running Arts Segment on PBS KQED)))
FA-LASH:  That Wizard of musical “Andrew Lloyd Webber has some changes he wanted to make on “The Wizard of Oz”.  What can he do with this old and overworked story? But he is determined. He has added some new songs for the production at the London Palladium. The stars are Michael Crawford (Wizard) and Danielle Hope (Dorothy).  They plan on having four new songs for the February previews.  Gee, I hope Dorothy doesn’t crash down on my house.
NOIR CITY 9 STARTS ON JANUARY 21. – AT THE CASTRO.
With Movies like “The Dark Mirror”, “The Stranger On The Third Floor” and “The Strange Affair of Uncle Harry” (I think I knew him) – YOU ABSOLUTELY WON’T WANT TO MISS ANY OF THE 24 NOIR FILMS. Some so rare – that we may never get a chance to see them again.
The film Noir Foundation can be found on both Facebook and Myspace. Get your season pass now while you have a chance through “Brown Paper Tickets.com.”  Double features are only $10.00 bucks.  Season pass for all the movies is $100.
This is a Noir Lovers event – where you meet the coolest people.  You can mingle in the lobby, buy popcorn and listen to cool music before the shows start.
I’m very Noir – and I will be there.
Posted by Unknown at Monday, December 27, 2010 No comments:

LEE HARTGRAVE TONIGHT
FAITH WINTHROP IS BACK AT THE RRAZZ ROOM
Faith Winthrop – Singer and Music teacher, not only sings the songs of others, but she has written many songs of her own that have been picked up by other singers.
She has had a tremendous impact on the music business – but, on the other hand – she says that trends have not really changed that much.  And – Winthrop has the faith that the standards will never - ever go away. That’s why she is doing this special show this evening at The Rrazz Room about the songs of Johnny Mercer.
Mercer was one of the most prolific writers and performer of wonderful music during his time in the spotlight. And, you know what, his candle of Fame is still burning brightly.  Faith is like Mercer, in that each song she gives the wonderful Mercer songs deep heartfelt feeling and imagination.  You don’t feel that you are just listening to music – no – you’re just living it.  I always marvel, at her superb and spirited style.  You will be captivated too.
AT THE RRAZZ ROOM – 8pm Tonight – Dec. 14, 2010
http://www.therrazzroom.com/
(((Lee Hartgrave has contributed many articles to the San Francisco Chronicle Sunday Datebook Section and produced and hosted a long-running Arts Segment on PBS KQED)))
Posted by Unknown at Tuesday, December 14, 2010 No comments:

BABES IN ARMS AT 42ND STREET MOON
The large cast in this Original “Babes In Arms” production is just packed with showbiz musical talent. It’s an unparalleled era that we will never see again. Except of course on the stage.
The musical score is just amazing. Here is just a sample of some of the great musical numbers in the show: “Where or When” -  “I Wish I were in Love Again” – “My funny Valentine” – “Johnny One-Note” – “The Lady is a Tramp” are just some of the great tunes in “Babes”.
I loved everything about this show. Michael Scott Wells plays the exuberant teen – that wants to put on a show in a Barn. He is just a delight, and certainly headed for stardom. He will be in another 42nd Moon show later this season (Strike Up the Band.)
All of the actors show amazing charisma.  In fact, there is all over chemistry between all the actors. The solid talent really shines in “Babes”.
I’m a sucker for song and dance numbers and there are plenty in the rousing musical. What a happy time it is when you get to watch this musical. You can almost smell Apple Pie baking in Mom’s kitchen. There actually was not a pie baking or a Mom’s kitchen – but I can imagine it.
The staging is just magnificent – and the dance numbers by Isaiah Boyd (Irving DeQuincy). He is a delight to watch (and an audience favorite) – and I might add – Brilliant!
You would not want to deprive yourself by not seeing this fresh, sweet, and bright show. ‘Come on, let’s put on a show!’ is the rallying call - for this amazing “Babes In Arms”.  As one of the actors said: “I’ve got to put on a something pure and free. I’ve got to put on a show!” And then he did.
THESE ACTORS MADE THIS ONE OF THE SMARTEST, SHARPEST, MUSICAL COMEDY I’VE SEEN IN AGES.
THERE NAMES: DANNY COZART – ANNIE DONAHEY – BEN EUPHRAT – ZAK FRANCZAK – JOSHUA JAMES – ALEXANDRA KAPRIELIAN – DIRK LEATHERMAN – SOPHIA ROSE MORRIS – CORINNE PROCTOR – TYNER RUSHING -  JOHATHAN SHUE – GABRIEL STEPHENS – MICHAEL SCOTT WELLS – ISIAH BOYD.
AT THE 42ND STREET MOON – EUREKA THEATRE
DIRECTED BY: DYAN McBRIDE (Stunning work)
RATING: FOUR GLASSES OF CHAMPAGNE!!!! (highest rating) –trademarked-
(((Lee Hartgrave has contributed many articles to the San Francisco Chronicle Sunday Datebook and produced and hosted a long-running arts segment on PBS KQED)))
FOLLOW LEE:  http://www.facebook.com/leehartgrave
http://www.twitter.com/famereporter.

BARB JUNGR IS AS GOOD AS IT GETS
BARB JUNGR SINGS THE NEW AMERICAN SONG BOOK
We’ve heard “I’m a Believer” many times lately. Neil Diamond’s song still shines and every version always keeps me mesmerized. For Heavens sake – you must hear this song. Jungr’s voice really raps around it to a different beat. It’s obvious that she literally puts her all into this moment.
This is kind of like a traveling story in song. Her “Once in a Lifetime” is sublime. On this intriguing song -- written by David Byrne and Brian Eno  -- Jungr digs deep to bring us an outstanding complete fusion of song and score.  It’s really luscious.
“Everything I own” is a very intriguing ‘Set Me Free’ song …followed by that great break-up song “You Ain’t Going Nowhere” written by Bob Dylan. It’s the break-up song that trumps all others.
Then there is the “Sultry” “Can’t Get Used to Losing You” (Doc Pomus & Mort Shuman). What can I say? It’s beyond soaring. Jungr gives us an extremely emotional “Everything I Own”.  Better order another drink – you’ll need it. Also loved her Rendition of Paul Simon “My Little Town.”
I had a chat with Jungr before the show. I asked her what was the funniest thing that every happened to you on stage? – “The funniest thing was in Tanzania. I was doing an afternoon performance way, way out in the bush, in a small open air amphitheatre, when suddenly the stage was invaded by dancing audience members with their chickens and goats!” Yeh – I would say that is funny – even terrifying.
I also asked Jungr what her top three favorite songs would be: “Oh, I can’t do that. There are some songs that stay in year after year, and they are a long list – but I would include “I Want You.” (Dylan) – “Suzanne” (Cohen) and Marieke – (Brel and Jouannest).  Good choices Barb.
One of the most wonderful things about an evening with Barb Jungr is that you hear every note and every lyric. She gives the kind of performance that we go to a Cabaret for.
RATING: FOUR GLASSES OF CHAMPAGNE!!!!
AT THE RRAZZ ROOM.  http://www.therazzroom.com/
There may still be some Tickets available for Tonight.
(((Lee Hartgrave has contributed many articles to the San Francisco Chronicle Sunday Datebook and produced and hosted a long-running Årts Segment on PBS KQED)))
Posted by Unknown at Wednesday, December 08, 2010 No comments:

LEE HARTGRAVE TONIGHT
TALENTED SINGER DAVID CAMPBELL IS ALSO VERY FUNNY
David Campbell is utterly entertaining and compelling.  the Rrazz Room was he perfect place to see his high energy show.  His music set at the Rrazz will keep you mesmerized as he wrings every word of some of the most famous musical numbers in the world.
Campbell has an extensive Theatre Career (Best Actor in ‘Sunset Boulevard). He also got the award for Male Artist in a leading role in (Carousel. It would take all afternoon to list all the Awards that he has won or been nominated for.  In addition to his recording career – Campbell has been in many T.V. shows (a contestant on ‘Dancing With the Stars). He has even performed with his father on numerous occasions – including an episode of “Dancing With Stars”.
On his New C.D – David Campbell On Broadway never sounded more assured and magnetic. I was especially overwhelmed with everything on the C.D.  Songs like “When I Get My Name in Lights” is wonderful. Here’s a lyric “I’d do anything To Get My name In Lights.”  And you know what? – I think he’s already done that.
Also on the Broadway C.D. is the beautiful “Bring Him Home” from Les Miz. Oh, My God – is that ever touching.  His voice on this one is like a Four Lane Highway. Dazzling and Gripping musical pipes.
The old Chestnut from Oklahoma “Oh, What Å Beautiful Mornin’” is always good to hear – but Campbell turns it into a masterpiece. Hayride anyone? I had an Uncle Frank that sang that song on every corner in the neighborhood to anyone that would listen.
“Some Other Time” is another tearjerker. Here’s a goodbye lyric: Oh well – we’ll catch up some other time.” If this doesn’t break your heart – then nothing will.
Campbell is one of those magnetic performers. His music and stunning good looks – will certainly keep you on the edge of your seats.  And hey, at the Rrazz Room they are very comfortable. The Audience demanded more -- but the piano player didn't have the charts. "I'll be be back" Campbell beamed out to the audience. They went wild and gave him a standing ovation. One Audience member said to me: "Not a wrong note in the whole show." And you know what? He was right. 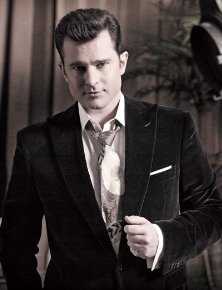 RATING FOR THE C.D.
FOUR GLASSES OF CHAMPAGNE!!!!
(highest rating) – trademarked
INFO AND TIX: http://www.therrazzroom.com/
(((Lee Hartgrave has contributed many articles to the San Francisco Chronicle Sunday Datebook and produced and hosted a long-running Arts Segment on PBS KQED)))
Posted by Unknown at Sunday, December 05, 2010 No comments: