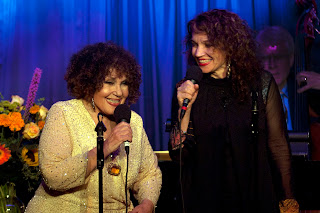 Pictured: Dame Cleo Laine and Daughter Jacqui Dankworth
Photo: Pat Johnson
Buzzin – Lee Hartgrave
Cleo Laine – Unforgettable!
When Cleo Laine comes up on the stage it doesn’t take long for her to hypnotize the audience as she wraps her deep throaty velvet voice around the lyrics.
Yeah – there is no doubt about it. Laine is an incredibly versatile singer. She swings on “I Want To Be Happy” and charms us beyond belief with the moody “I Thought About You.”  Laine’s “Fascinating Rhythm” is definitely her own. Of course – to really get your blood cursing – nothing beats a rousing uplifting version of “Hallelujah” – Love it, Love and Love it.
Very amusing is the song “Woman Talk” – by Carol Brown. “She wrote me terrible lyrics about Men” – Sez Laine. Of course, she jests. I think.
In between the songs – Paine endears herself to the “Mad about you audience.” She says: “I’m not really a talker.” That’s not true. She is a talker and a very amusing one at that. Laine continues: “My I.Q is just average.” Really, I would never have thought that. She’s brilliant. She could talk all night – and we would want more.
Her daughter Jacqui Dankworth came up on the stage and the two did some duets. Jacqui also sang some great solo numbers. In England Dankworth was Cindrella in the Sondheim musical “Into The Woods”. Her Mom Cleo said: “And guess what – I was in the same production on Broadway. And guess what role I played – the Witch!” She looks out at the audience and says: “I’m old you know.” No, your not- shouted the audience. Laine is maybe in the 80’s – but as they say: ‘80’s is the new 70’s’. She looks it.
At the end of the show – Dame Cleo and her daughter did a duet of a very moving song from “Into the Woods”. What can I say – it’s a tearjerker – and hard to hold back the tears, as the audience could not help but think about the late John Dankworth. Cleo Laine is the best of the best.  It’s impossible not to be entertained. Her voice is still clear and beautiful. It’s dynamite!
THE BAND: LARRY DUNLAP (PIANO/MUSICAL DIRECTOR) – JIM ZIMMERMAN (DRUMS) – SEWARD MC CAIN (BASS). IT’S A SMOOTH AND GUTSY BLEND OF SOUND.
Playing through next Sunday at www.therrazzroom.com.
RATING: FOUR GLASSES OF CHAMPAGNE!!!! (highest rating) - trademarked-
(Note: This is a preview review. This review will be published on beyondchron.org and may contain some minor changes.)
Posted by Unknown at Wednesday, October 20, 2010 No comments: