There is something for everyone is the fast moving Cabaret show at the Rrazz Room. The Sisters sing Berlin, Porter, Comden and Green, Coleman, Sondheim and Leosser. And that is just the beginning. With a song written by sister Ann Hampton Callaway, they both sing together “Here Come the Callaway’s.” And like it or not they make a huge statement. They now own the stage at the Rrazz. Throughout the show Ann and Liz jostle with each other for stool space. And they jest with each other on songs like “Friendship” by Cole Porter. The song is meant to be a little bitchy, and it is – but I would like to see them really sink their teeth into each other. I mean Girls – really let go and have it out. With words that is. The entire evening is total fun. They joke back and forth between songs.  Ånn: “What are you doing?’ Liz: “Just showing everyone my new solo C.D.” Ann: “It’s not really as big as my Emmy – or your husband.” A little double meaning here?  I have one little suggestion. I would drop the “Over The Rainbow”. Sure Ann gives it her all – but that is Judy’s song, and hundreds have tried to reinvent the song to make it their own. It just doesn’t work. The song is burnt into people’s minds as Judy’s. After singing a Harold Arlen song  - Ann sez – “Nobody does weather like Årlen.”  Again showing the ongoing humor. Just about the middle of the show – it really becomes electric. With Stephen Schwartz’s “Loathing” – “A Boy Like That” (West Side Story) Bernstein/Sondheim – “I Know Him So Well” (Rice, Ulvaeus, Andersson). All Just Fantastic! Loved every moment of it!“Our time” by Stephen Sondheim sung by the Sisters takes on a new glow. Liz sings a sensational version of “Meadow Lark” from the musical “The Baker’s Wife”.  Funny, I have seen that musical a couple of times. And I didn’t remember it being in the show. If it sounded as good as Liz’s version – I’m sure I would have remembered it. This is a good time show. It’s Sorority girls gone wild – jiving to a big-band hit parade of songs from the Great American Song Book. And here is that Big Band: Alex Rybeck – piano and musical direction. Daniel Fabricant, bass. Vince Lateano, drums --and Dan Foster, direction.  “Great sounds by a terrific band!” See this show…and like the song -- “I Still Believe” – you will still believe that music is the BEST thing in the world.  www.therrazzroom.com.   Through May 2, 2010. (((Lee Hartgrave has contributed many articles to the San Francisco Chronicle Sunday Datebook and Hosted and produced a long-running Arts Segment on PBS KQED)))FOLLOW LEE: www.beyondchron.org. www.twitter.com/famereporter.
www.facebook.com/leehartgrave.
Posted by Unknown at Wednesday, April 28, 2010 No comments:

GIRLFRIEND IS IRRESISTIBLE AT BERKELEY REP 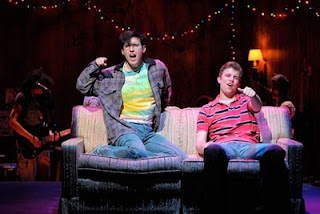 Not only are the leads terrific actors – they blaze through eleven entertaining songs about love, yearning for love, breaking up and getting back together.

The songs carry the story. For instance, there is the achingly beautiful “You Don’t Love Me” (Lyric: “You can’t see how I matter in this world”) – backed with plaintive guitar sounds. The boys sing out their love for each other with heart on the sleeve emotions. They are so touching and so real. You’re not watching just a musical. No, you are watching young love as they give us lyrics that deal with betrayal, anger and of course love.

If this musical doesn’t grab you by the Balls and twist you around, then you must be soul less. The music by Matthew Sweet --smoothly segues from astounding musical riffing – and acoustic genius, plus tear jerking moments. Ah, but wait – there is happiness and joy along the way.

At the beginning the music kinda startles you. But, it mellows out with melodic rock that will actually have you singing it during intermission in the bathroom. The guitar music is not to excess and the words are perfectly clear. You won’t miss a thing.

“Girfriend” -- is a perfectly crafted musical. It’s the one. The one that you will want to tell your friends about. It’s real, it’s you – and Gay or straight, you will find things that bring memories back to you from your high school years. That you can bet on!

AT THE BERKELEY REP THEATRE

in the musical "Lady Be Good"
Courtesy Photo 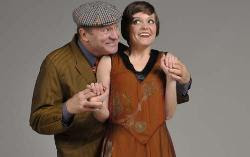 
LADY BE GOOD AT 42nd Street Moon
George and Ira Gershwin wrote some of the best music for musicals in history. And 42nd Street Moon knows how to bring that music to life on the Eureka Stage.

“LADY BE GOOD” first opened at the Liberty Theatre on Broadway in December 1924. The story takes us through avenues of mistaken identities, spoofs; show stopping songs and fantastic dance routines. Yep – there is no doubt about it. The 42nd Street Moon players are not amateurs. No, they are Broadway ready – and they’re dancing and singing.

The story revolves around an out-of-work sister and brother. They get booted out of their apartment and end up on the sidewalk. But by happenstance -- they find romance and money.

Adding to the great fun evening is the hilarious, scheming, outrageously funny Lawyer, Watty Watkins (Åndrew Boyer). He is entertaining as ‘Hell’ with stage presence that’s just explosive! Boy, has he got a lot of tricks up his sleeve.

The show was originally written for Fred and Adele Astaire – and it was the Gershwin’s first Broadway hit. With the permission of the Gershwin Estate – the action takes place in San Francisco and Napa.

You’ll remember her. I’m talking about Rena Wilson, who plays the delightful, somewhat ditzy Susie Trevor. If ever a role was made for anyone – they must have had Wilson in their mind. She fits the era so perfectly with her sweet smile and those little bee lips. No wonder she ends up hooking up with a millionaire in the show. You can’t help being swept up in the energy.

42nd  Street Moon sure has the knack to revive these wonderful musicals. They follow the tradition – but make them fresh again with innovation. I could see them over and over again – and never want to leave.

The Big Cast is all special. They are the reason that this musical literally jumps off the stage to involve you. It’s an electric fantasia that is full of song, dance and innocent sexuality. Let’s PUT THE SPOTLIGHT ON THEM: Lisa Shepard Hensley (Josephine Vanderwater) sure is fascinating. Ian Simpson (Dick Trevor) as the out-of-work brother – must have channeled Fred Åstaire. He’s one of the best.

The Musical Direction by Dave Dobrusky is a 3-D extravaganza

The Director Chris Smith pulled out all the possibilities – and worked miracles. THIS IS A CAN’T
MISS SHOW! 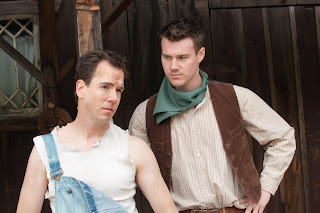 OKLAHOMA ROARS ONTO THE LESHER CENTER.

Let me say – that right from the get go -- this Oklahoma sweeps you up in the excitement, the dancing, the singing and the Choreography. Having seen many, many productions of this huge musical – this one now is my “new favorite Oklahoma of the year. Maybe The Decade!” O.K. so you want to know why. Well, here are a few of the reasons: Extremely Entertaining – wickedly humorous – honest, down-home humor – terrific acting – terrific singing – and it ropes you in, and keeps you there.The expressions on the faces of the cast are real and delectably amusing, and that’s what keep’s your interest. This musical has heart. But just having that is sometimes not enough. No, it needs talent. And I gotta say, this cast is brimming with it. From the moment that ‘Curly’ comes out on the stage and knocks you out with the Song ‘Oklahoma’ -- there was blistering magic in the air. Curly is not only handsome – he has such a sensational strong voice that you might even be able to open up your windows at home, and hear him sing. Best, however, is to be in the Theatre. This is not just any musical – it’s an Epic. You wouldn’t want to be hanging out your window throughout an epic. The seats are more comfortable at the Lesher Center Theater.But, back to the musical. Forgive me for veering off into madness, but I do that occasionally. There are cornfields, a windmill comes into view and Aunt Eller is churning butter out near the front porch. Oklahoma is about Boy loves girl, Girl also loves boy, but plays hard to get. Then there is the triangle. A hired hand, Jud (Jeffrey Draper) also loves the girl. It’s the age-old story -- the girl uses the hired hand to make the one she really loves, Curly (Zachary Franczak) eager to marry her. By the way the hired hand (Jud) is the bad-guy in this show – and a really outstanding actor. Laurey (Jessica Knudson) has a dream sequence that turns into a nightmarish kind of Ballet. Oh, the Ballet is gorgeous, but Laurey’s Dreams are not that happy. Don’t worry - this is Ballet light. Much of it is Modern and delightful. Trust me. Have I ever steered you wrong? And Laurey is a delight. Aunt Eller (the Wonderful Kerrie Shawn) is fun, fun and fun – as she holds sway over the rambunctious bucks at a party. It may be 60 years since ‘Oklahoma’ took Broadway by storm – but it is still one of America’s best entertaining classics.There is a lot of comic relief in the show. You can’t beat Ali Hakim – a Peddler (Joel Roster), who gets mixed up with the wrong woman - Ado Annie Carnes (Elise Youself) who falls in love too easily. She is just awesome. He’s charming and she’s a misguided Vixen.  There are so many fine actors, dancers and singers on the Lesher Stage – and they all deserve standing ovations. Even the little kids are marvelous. Then there is Will Parker (Steve Rhyne). His presence reminds of that great dancer and entertainer Donald O’Connor. Now, that’s good company to keep. Bravo Will! CONDUCTOR, CARL PISTER LEADS THE FIRST CLASS ORCHESTRA WITH MASTERFUL STROKES. THERE IS NO WAY THAT YOU WOULD WANT TO MISS THIS PRODUCTION. IT’S BROADWAY IN WALNUT CREEK. AT THE LESHER PERFORMING ARTS CENTER IN WALNUT CREEKRATING: FOUR GLASSES OF CHAMPAGNE!!!! (highest rating) – trademarked-(Recipient of The Lee Hartgrave FAME AWARD for best Musical Revival)(((Lee Hartgrave has contributed many articles to the San Francisco Chronicle Sunday Datebook and produced a long-running Arts Segment on PBS KQED))) FOLLOW LEE: http://www.twitter@famereporter/http://www.facebook@leehartgrave/http://www.beyondchron.org/ 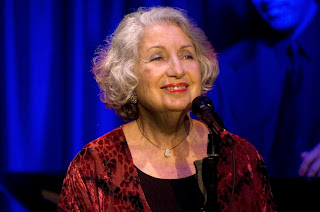 Winthrop not only sings marvelous songs that others have written, but she also writes and sings some songs of her own. She jokes about her age, but her voice belies her.

Winthrop has a unique, slow and mellow way of delivering the message to us. And songs like “Here’s To Life” is like it were carefully wrapped up in honey. Her ‘Mood Indigo” takes you on an Ocean trip. You kinda feel like you’re sitting under a Palm Tree and the branches are gently moving. Oh Boy – was that a wonderful feeling.

Winthrop kids about “Age” a lot with songs “Too Old To Die Young” and “New Age/Old Age Blues” Here’s a line: “I Take My Ginkgo Biloba, every day.” She also has a lot of fun with “Maybe My Very Last Meal” (A line: - It just Goes out one end and out the other.)

The touching “You Are There” just wraps around you like the fog has just touched the rocks on “Lands End!” Winthrop’s haunting wrap-a-round technique is incomparable.

To paraphrase Bette Davis: “Buckle-up! This is a thrill ride that you will want to experience again and again.” The arrangements are beautiful, romantic and entertaining. Winthrop’s smooth voice brings out the true meaning of every song. I highly recommend that you see her tonight at the Rrazz Room. For me – it was a great present. You should go and get one too.