THE ARTIST: NOT A TALKIE 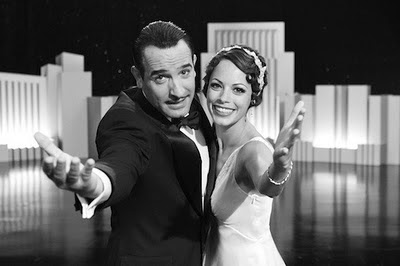 O.K. here’s the deal. At the beginning of the film George Valentin (Jean Dujardin) is at a premiere of his film “A Russian Affair”. The actor poses for pictures in front of the Theater. There is a girl who is dazzled by Valentin. She accidently drops her purse – bends down to pick it up, but the crowd pushes her into Valentin. The next day her photo ends up on the front page of newspapers with the question “Who’s That Girl?”

Of course – you can guess what happens next. She is the new “A Star is Born.” She auditions as a dancer – Valentin offers her a role in his new film. Studio Boss Al Zimmer (John Goodman) objects. “That Girl becomes a bigger star than Valentin. A couple of years later the Studio Boss ends the production of the ‘Silent Films’. Valentin says that “Sound is just a fad.” He produces a silent film that turns into a disaster. He is basically washed up in the film industry. This is where “The Star Is Born” part comes in. Valentin sells off everything. He now is desperate and drunk all the time. Miller (that Girl) insists that Valentin co-star in her next film in a dance routine.

The film in black and white certainly has that Silent era look on the screen. But here’s the problem. Having a movie about not hearing voices is O.K. if you have enough sub-titles to let us know what in the hell is going on. Here’s another mistake. When they leave the studio – why do they open and close their mouths out on the streets and in cars as if they are still in a silent movie? There is one scene where a cop is talking. Only we don’t hear anything. Care to try lip reading? I don’t. In Sunset Boulevard, Norma Desmond talked when she was big in movies. When she got home and on the street – she talked like anyone else would – OUTLOUD! Yes, they had faces in those days – and they also could talked off the screen.

Sorry – but this movie is incomprehensible the way it is. They say that the screenplay took four months to write. Really? – what on earth was there to write about? I could have done it in a week.

I will say that it is elegantly filmed. But after the first half-hour the film begins to become sluggish. The music is one song that is played many times over and over. Yes – it has charming moments and it is loaded with nostalgia about the good old days – but that’s not enough.

Now some of you may say: “I can’t wait to see it again.” That’s fine with me, if you’re into torture. Then again – the film has appeared on some Critics top ten lists as best film of 2011. On the other hand, some critics would select the Straw man from the Wizard of Oz as best actor. I’ll save you a few bucks – don’t go.