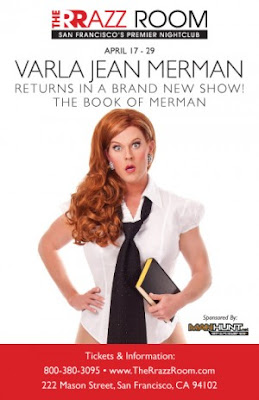 In Defense of the Slow, the long, the Boring -- there is no Defense. To escape the long and boring fare that is on most stages – you WILL rejoice when you discover Varla Jean’s show at the Rrazz.

Her show is filled with imagination. The comedy is fresh, and the sexual innuendos never seem to end. Take my word for it – this is not a “Bummer Summer - cheap show!” Varla Jean is marvelously inventive. She is fantastic…gorgeous…and yes, delirious! “Oh-Wow!” I’ve never laughed so hard – ever! She is pure brilliance. There are more gut-busting laughs than you’ll be able to count!

Not only is Varla a marvelous comedian – and also a really great singer. Heck, she sings everything from Pop, Broadway, Country and Opera.” Why doesn’t she have her own comedy show on a major Television Station? Will someone please tell those endlessly and uninteresting fat ass producers to get off of the casting couches, and hire some real talent.

I love this snide remark: “Children are like Sponges. They’re full of bacteria!” Here’s another original from Varla: - “Foreskins are just going to disappear, like a Sock in a Dryer!” Oh, Gee gosh – I hope not. About ‘Ambian’ -- Varla sez: “About Ambian. Now I only take two. I don’t swallow, I chew!”

This self-assured Smarty looks at the audience and says: - “I won’t remember you – you’ll remember me! After-all, I gave you the gift.” About ‘Fleet Enemas’ – “I’m their #2 Customer.” Seeing her live and to hear her comments in person, is a real joy. She knows how to really put the spin on every word.

You not only get a stage show – you also get two large screens on each side of the stage showing clips of sexually outrageous goings on. You’ll need some “Fleet” when she gets done with you. On the screen or on the stage – Varla knows how to weaken your knees.

This is a luscious piece of outrageous musical Theater. Varla is an indispensable ticket. It’s hard to imagine any hurricane on a stage like Varla. And, might I add -- dangerously immoral! I love it! Hey, if Bill Maher can get away with it on HBO – why can’t Varla Jean and her Book of Merman? Write to HBO and tell them that she should have her own obscene and obnoxious show -- just like Bill Maher.

Now at the Rrazz Room Thru April 29th.