TOMMY IGOE AND HIS BAND ELECTRIFY THE AUDIENCE

GENE KRUPA WAS A GIANT IN THE OLD DAYS. A DRUMMER FOR THE WORLD. 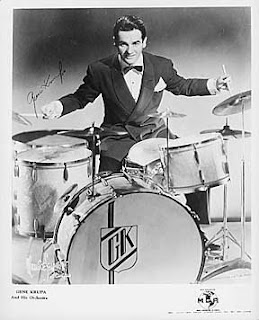 NOW comes along TOMMY IGOE, who out shines even the Great Krupa. I know it’s hard to believe, but that was then, when Krupa formed the first real rhythm section in Count Basie’s Orchestra. And he was the original hi-hat artist. Just to let the young talents know how Krupa looked, I’m posting a picture of him.

Now we have a new Superman drumming god. And that is Tommy Igoe. He is totally mesmerizing. Igoe is also a great innovator. His taste in music swings way out – and the solos that he gives us are just the most joyful I’ve heard. He sure can make those drums sing. It’s amazing how he can turn a simple beat into mesmerizing mantra. Igoe has a thunderous technique that is playful and entertaining. It’s hard swinging magic. No doubt about it. He is a great musical technician.

With his marvelous band – Igoe’s boys bring some of the most incredible, smooth music to the Rrazz. And as far as Igoe goes – he seems to have more hands and feet than any musician I have ever seen.

Check this out. The Tommy Igoe band will be appearing every April - Monday Evenings -- at the Rrazz. Believe me – this is some of the most eloquent playing that I’ve heard in a long, long time. Impeccably presented. The sound is “One for the Ages!”