VALERIE SIMPSON – Instantly won us over

TALK ABOUT ELECTRYING MOMENTS – I’m still tingling. The minute Simpson walked on the stage – she took us on an emotional musical thrill ride.

The evening was just “crackling” with the great songs she sang for the standing and cheering audience. Yep, they were jumping up and down to the beat of those famed melodies. Take the delicious “Ain’t No Mountain Higher” – sure does make you stand up and jiggle your butt. Everyone was doing it.

Simpson is also very funny, with her little asides – “I didn’t take notes I was too busy living” – “And, you know what they say – Loose Lips, sink ships!” Another of my favorites was “Ain’t Nothing Like The Real Thing”. And of course, what would a Simpson song be if she didn’t sing “Solid Like A Rock.” Valerie has great backup singers and a tremendous Orchestra on the stage. I’m still tingling.

When she sang “Solid as a Rock” – I could actually visualize Nick Ashford on that stage. This was an emotional tribute to the great Ashford. There is no doubt about it – he was “solid as a rock”! I’ll never forget him. But Valerie and Clayton bring him back in song. Life is a journey – but this was a trip!

Simpson came out on the stage wearing a stunning white feathery dress. She looked like a beautiful Swan. Just fabulous! This is a must see show.

NOW AT THE RRAZZ ROOM THRU MAY 13.

SCATHING CRITIQUE OF POP CULTURE is a hilarious film comedy that shows American shallowness boosted by a cruel layer, that is conjured up from media propaganda. Everyone wants to get on the bandwagon – even if means shooting someone to get yourself in the limelight. The take off of an American Idol type show shows the lengths that T.V. will go to get ratings. In this film – they make an Idol out of one of the worst singers ever. And, guess what – they even make fun of him.

As I was watching the movie – I got a little worried that some idiots may think it’s funny to shoot people. After all – it’s in a movie. What really worries me is that they don’t know a satire when they see it. Most young people are already shallow, seeking out insane stunts just to get their face on T.V.

Even the people in the movie, that are doing the erratic shooting, complain that their faces have not appeared yet -- on the big screen. Yes, it’s a revisit of Bonnie and Clyde. This Bonnie and Clyde are even more insane than the original ones.

Goldthwait (the Director) claims that this is not a political film. Well, yes and no. Some of the film has political hanging from trees. Then there are other times, when someone who feels that he hasn’t had a good deal lately just decides to shoot people at random. You know like if you get fired.

This movie is borderline insanity. You love it and hate it at the same time. And it also reminds of the ‘famed’ “Clockwork Orange.” But here is what we already know – the film points out in spades, that our society is shallow. I say – only use a Cell phone for necessity, and stop acting like robots, and watch your back. Remember people are generally stupid, and they probably don’t like you. And politicians are dictators! That’s what this movie tells us. And, you know what – its true!

NOW PLAYING AT THE BRIDGE THEATRE 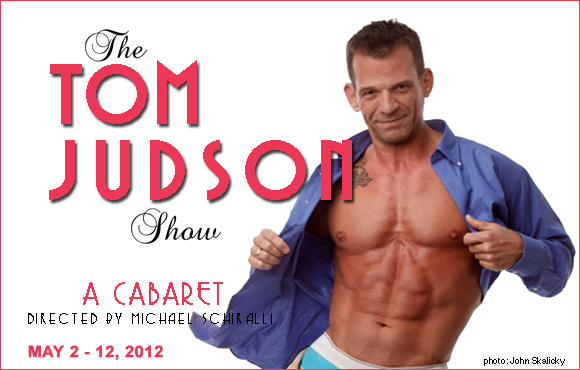 TOM JUDSON has a new show that brings back the era of the Elegant Supper Club. In those days plaid sport coats were the style. To give you an idea of what “those days” were like, just tune into Mad Man on AMC. Tom tickles the Ivories (Piano) with some old gems that are now shining again and Judson has polished them to their former glory.

Actually, the handsome Judson could turn any song into Gold. Not only does he sing – and he tells us Great stories about showbiz. They are bubbly tales that supply the audience with plenty of joy.

Judson is on the New Conservatory Stage where he is surrounded with a vintage look of a drawing room in a rich mansion. He fits nicely into this dreamy space with his beautiful tunes and inventive madcap stories.

As much as I adored his show at NCTC – I would love to see him in a Cabaret type show, where drinks are sold. Not that I drink – but Cabaret singers do seem to make the audience more receptive to frothy cocktail music. And Judson sure is a handsome looking lad. You just wanna hug him. I’d like to see him at The Rrazz Room for a couple of nights. He will instantly win you over.

AT THE NEW CONSERVATORY THEATRE

What a dream evening this is. There are gorgeous costumes, gorgeous guys and gorgeous music. How can a musical like “Zorba” go wrong? Well, I’m happy to say that nothing goes wrong. Oh, Well, -- Yes, there was a little innocent thing. A glass fell off a tray, it was not intentional. But, the cast picked up the pace immediately. It was fun to watch them go on with the show.

The musical score is unimpeachable. After all, that’s what keeps the romantic sparks going and the dancing is effortless and summons the spirit. There is nothing like a beautifully done love story. Sure, the musical is not all sweetness and love – there are some sad moments along the way. But again, the dancing summons the spirit of Greek Joy. Thanks to the spirited directing by Greg McKellan. And thanks to the music by John Kander and Lyrics by Fred Ebb. And a special “Clap Your Hands” for Musical Director Dave Dobrusky and Nick Di Scala on “Reeds”.