EMBASSY IS A HOOT AND MORE

IT REMINDS ME OF FAWLTY TOWERS. Very British you know. I have no issues with this play at all. ‘Embassy’ is as goofy as a play can get. There is a laugh a minute, or maybe even every second. Lively star studded cast brings the "wrong it's right" characters to life.

One thing I know for sure, is that you will be laughing and snickering every time someone enters through a different door. The playwright Brian Thorstenson based this new work, on a Joan Didion quote: “ It’s high-minded, and second, he didn’t intend for it to be intelligible.” No need for Brian to worry – it is unintelligible…and that’s why you’ll love it.

Here’s a brief look at this insane plot: An ambassador is on an unnamed island. He’s trying to remodel his embassy. But, he gets distracted as the US Government orders him to redeploy to a war-torn country. There is more -- and the positively insane man bursts on the scene. He calls himself “The Third Man.”

This is character acting that endlessly fascinates. Richard Frederick plays the Ambassador. He’s delectably amusing. His housekeeper (Olivia Rosaldo) constantly eavesdrops. Her tidbits that she garners will come in handy later. She plays the role with great flair.

This is probably one of the best situational comedies, I’ve seen in a long time. Each entrance and exit by the characters is perfectly choreographed. It’s a dance of escalating frustration. And that’s what makes this play absolutely priceless in every sense of the word. The witty dialogue and hilarious slapstick make this a really great show!

Here are more of the wickedly hilarious players: Daniel Redmond (Robaire Dorchester-Scott) and Jan Zvaifler (Mrs. Blundercart round out this super bowl of comedy. 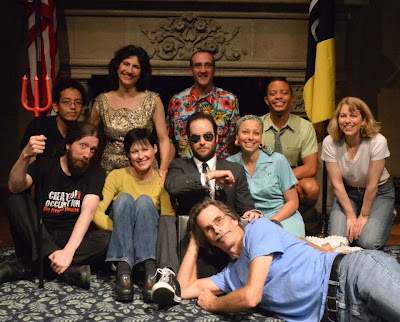 This Cast is on fire!  Courtesy Photo: Central Works

The Unique directing and lighting, is by Gary Graves. Tammy Berlin’s Costumes are a revelation and the sound by Gregory Scharpen is masterful.

CENTRAL WORKS MEANS IT WHEN THEY SAY: “WE MAKE PLAYS!” -- Yes they do – and with great flare!