HOW TO WRITE A NEW BOOK FOR THE BIBLE 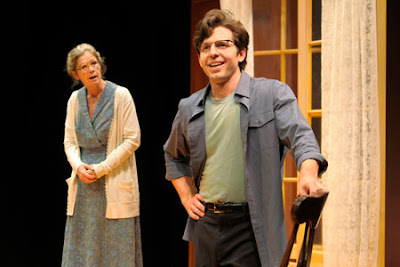 HOW TO WRITE A NEW BOOK FOR THE BIBLE

A Son has come home to take care of his mother who is on the edge of dying. She (Linda Gehringer) is feisty and contrary. The dying Mom hides her medicines from the Son and she sneaks into the bathroom to smoke cigarettes. Not a good Idea for someone who is dying from Cancer.

Her son and care keeper is a character oddly enough named Bill Cain (the Author’s name) – played by Tyler Pierce. This play is about a Mother and Son that have a difficult time getting along together. There are religious issues, fun, bitter sweet memories -- and ghosts of a father that has recently died.

The play slides back and forth from the present to the past. Kind of like, “Xmas Past”.
You see the son is a writer. He is also a Jesuit priest, who is kind and caring – even though the family basically doesn’t think that writing is anything important. They see it as a non-job.

The play itself spends a long time judging people, especially (the Son) – but they never seem to have the time to judge themselves. This is a brilliant creation that Bill Cain has come up with. It could work on several levels – even as an Opera. It has that kind of Operatic feel to it. The staging is very operatic. You expect them to start singing a sumptuous Aria.

The older women who is dying, throws out a couple of four letter words. Hey, wouldn’t you also if you were in terrible pain? There is no good or evil here. Just a family, that is in deep despair.

I’ll tell you something. This play will linger in your mind for quite some time. Maybe forever. It’s certainly better than say, TV’s “Dancing with the Stars.”

You will be crying with laughter at times. And if you are not affected by the ending – well, then you are just not human. It surely will remain in your memory for a long time.

At the Berkeley Rep