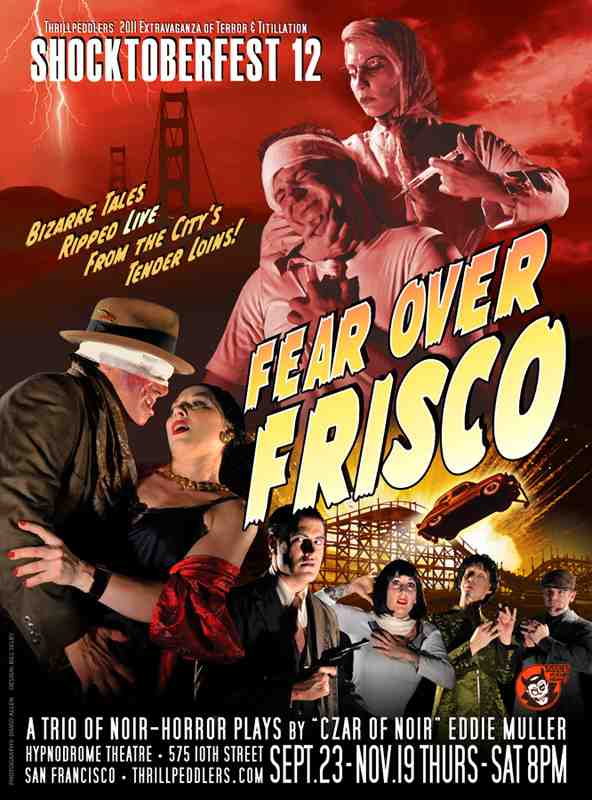 Well to get started, there was a tall good-looking guy standing in the Lobby Entrance of the Hypnodrome Theatre. I arrived early, but he said that I would have to wait outside. The PR guy came by and brought me back into the Lobby and introduced me to the tall good-looking man. We both remembered that we already knew each other. He was the famous “Czar of Noir” – Eddie Muller. The PR guy brought me a folding chair to wait for the Theatre to open. In the meantime – Muller introduced me as a famous writer. Was this a trick? Are they planning to put me on the scary stage? After all it is Noir mixed up with deviant and sadistic scenes.

Eddie Muller has written three spell-binding Noir plays “The Grand Inquisitor”, “Obvious Explanation” and The third play (The Drug) is directed by the over the top Russell Blackwood. But we love “Over the Top” screaming. Especially when they put someone’s eyes out.

“Drug” took place originally in Saigon. Muller rewrote the kinky play to play in San Francisco. The Czar has made it even kinkier than anyone could imagine. I think you might want to cover your eyes in some scenes. This is bizarre. You can expect screams that will freeze up your spine.

Sure it’s Graphic stuff. But it’s made to shock the audience. You will love the surprise ending where the lights go out completely for a time. There you are in a real blackout. Scary? Yes! Then in the dark, strange things happen to the audience in “The Spook Show”. Wow! It’s nerve racking. Glad I still had some popcorn to chew on.

AS USUAL THE CAST WAS EXTRAORDINARY!

Its their 12th Annual Extravaganza of Terror and titillation.