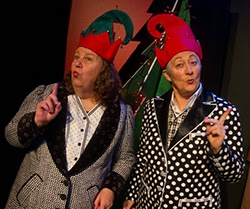 They're back. Run, run, run and hide. This wonderful story of two Lesbians (a Jew and a Christian) give us terrific oy-vays all the way to Christmas. Gee, can you imagine the two of them getting along? Yeh - I can!

Carolyn Myers is a Warrior Princess of high speed comedy. A little long here and there -- but crackpot ladies bring out some of the best outrageous stuff that I have ever heard. 'Farces" become them. Shall we say Genius?  Of course, you should.

Rock-A-Chrone -- works like magic. The Ladies are cutting edge entertainment. It's "Straight" Talk -- and not "so Straight" -- but who cares - they are heart-warming fun. They may be a little bit older -- but they know how to spice up night life. It's brilliantly smart and quick-witted. They, of course will stir the audience with a rousing chit chat about religion and politics. The best things happen on the stage -- especially the actors. The stage is so much better than home. The Ladies can't jump around  - but they are very funny in this smart touching comedy. They sure as hell have a devoted cult following.

NOW PLAYING AT THE EXIT THEATRE IN SAN FRANCISCO