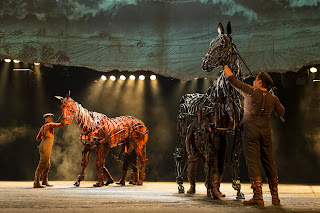 WAR HORSE (the Stage Play) is truly an epic family show. This marvelous play -- is based on the fantastic novel by Michael Morpurgo. His awesome wonderful story about a young man and his Horse Joey will never leave your mind.

First I saw the movie, which was magnificent. Now comes along the live version that Stars Joey the Horse. Of course, on the stage you would not expect live horses to be trotting along, but it only takes a few minutes to fall in love with the story. Just look into those big eyes on Joey – and you will be hooked. The Handspring Puppet Company captures the mystery and love between a Boy and his Horse magnificently.

Let me say this. There are no dumb animals. They know more than you think. It’s the Wars that are futile. I don’t really relish the sight of gorgeous Animals and sword-brandishing soldiers charging into the fray of great blasts of machine gun fire. War is a mess – and it should be abolished. I repeat – it’s the humans that are dumb, not the animals.

The lifelike puppets come to life right before your eyes. And when their eyes meet yours. You never forget the connection. And it is the love between a 16-year-old Boy Albert, who gives one of the most moving performances ever seen on the stage. Albert joins the Army to find his ‘Joey’ among the cruelty of war. When the Horses are overworked they just shoot them to put the poor animals to death. Don’t make a mistake about it. The Horse knows what you are about. Just look into those eyes – that tells you what they know.

The show sweeps you away. It’s an absolutely electrifying masterpiece. The breathtaking action sequences will keep you on the edge of your seat.

NOW ON STAGE AT THE CURRAN THEATRE THRU SEPT. 9TH 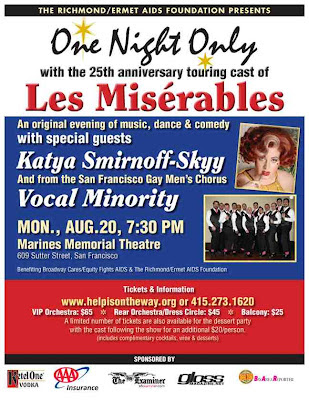