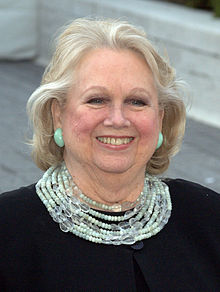 “Let’s Fall in Love” is the title of her sizzling sexy irresistible special concert event at the Rrazz Room. Cook has survived the stage, concerts and cabaret – and that’s why she is a legend in the entertainment world. Heck, she even did a solo concert at the Metropolitan Opera. Yes, I would say that she is like a Chameleon – she can do everything!

And Talk about “Makin' Whoopee” (Lyrics by Gus Kahn – 1928 from the show, Whoopee!) and Music by Walter Donaldson. Plus Layout: Barbara Cook - really cooks up everything special for you. She takes the old and dreary and dresses them up and compels us to hang on to every note. Cook has the amazing power to control the music. Barbara fully understands restraint. Oh yes – did I mention that the entire set for the evening was Sublime? Of course, her voice is deliciously controlled.

What is there not to love from Barbara in the Rrazz Room? All the great songs are there: Like – “I hadn’t anyone till you and “It Had To be you." And how about the mesmerizing Hoagy Carmichael song W/Lyrics by Ned Washington – “The Nearness of you?” You wanna be stunned? Well, this will do it for you.

Now Barbara Cook really knocks us out with “If I Love Again” (Music by Ben Oakland/Lyrics by P. Murray. Here’s a sample lyric from Cooks fantastic voice: “I often wonder why you came to me. If I love again – it will still be you. I’m so miserable without you – I’m glad you’re here.” O.k. – if Cook’s version of this song doesn’t knock you off of your chair – then you are “Tune Dead”!

NOW PLAYING THRU AUGUST 26 AT THE RRAZZ ROOM

(((Lee Hartgrave has contributed to the San Francisco Chronicle Sunday Datebook and he produced and hosted a long-running Arts Segment on PBS KQED)))
Posted by Unknown at Thursday, August 23, 2012