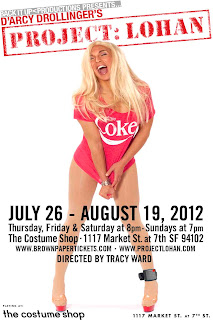 SHE WAS BIG! Playwright Drollinger says about her: “In Lindsay’s case, it was the paparazzi's flash bulbs that burnt her wings, sending her plummeting.” I think I managed to pick up a few of the feathers.

‘Project: Lohan - had the talent, but there were just too many temptations. She couldn’t help herself. Drollinger composed the show from material that he found from magazine articles, interviews and court transcripts. As the playwright says – “I didn’t need to actually write a show – it had already been written!” However, the playwright does emphasis that every word in the play is the actual dialogue. Look it up in the public records. It's all there.

Lindsay (D'Arcy as Lohan), is both a tragedy and an absolutely fabulous musical comedy star. The musical play torn right from the news -- gives us fabulous true-to-life-tales told by the actors on the stage. It’s really, really funny – touching and vital. I loved it! It’s one of the most spectacular master class moments of hilarity that you will remember for some time.

Look – here’s the real deal. This show holds no bars. Here is one quote: “they would sleep with just so many people – that’s me!” Here’s another great one: - “another Car accident – just like Princess Di!” As you know – Lindsay was always getting into accidents.  Other notables you will remember is a hilarious depiction of ‘Mr. Blackwell” on how to dress. Yes, this is a near perfect musical.

This show sure is lush and lovingly constructed. It teems with authentic atmosphere in this uproarious take on Agents, the endless line of paparazzi and annoying assistants.

D’Arcy Drollinger (in Drag) really shines as Lindsay Lohan in the show. And Tracy Ward is the exciting director of the cast of Six. The fascinating characters (89) of them, keep you busy watching. You’ve never seen such massive costume changes, along with luscious wigs, and you’ll never see another production like this anywhere or anytime in your life. “It Sizzles!”

The show is at the Costume Shop at 1117 Market Street – just down the block from the Orpheum Theatre. Runs through Aug. 19.