TRIASSIC PARQ - WITH LEE HARTGRAVE TONIGHT - FOR ALL EVENTS 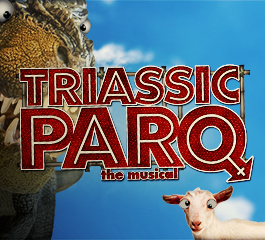 IT'S NUTTIER THAN A FRUIT CAKE

We're talkin' about Rock music that is surprisingly shameless. When it gets going -- this Cult zips along with R & B and wild Rock. At the very beginning - it's shockingly bizzare. Well hey there - you out there in the country...this is basicly about sexual music infestation.

This is really daunting. A female develops a male organ. In fact the heroine is prettily played by a male actor also. So what we have here is the popping out of genitals. There is not just one Penis pops out of the costume - but two. But, what the hell - the show is part jungle and part cage and not real. Everything is endlessly re-arranged.

Alex Rodriquez stands out in three major musical roles. His roles are convincingly androgynous - and he has the voice that would carry the voices at the Opera House in Show Boat. Java Harnly is a Mime-a-saurus. Now if things weren't weird enough...but what the heck - the musical is absurd and it's a hit.

Someone said to me - "I think it's an up beat Gay Show." Really...was it that phenomenal. I never would have known. But lets get real. This is a wonderful amazing super fun good time. The choreography is totally awesome. Oh, and by the way -- someone in the cast said: "I want to take a ride on my toot, toot train." I think you'll get it.

The show runs a compact 90 minutes with no intermission, but seems longer because of the constant climaxes. Still the howls of appreciation is a must see that is talking info Structure -- and gives us a genius cast and direction.