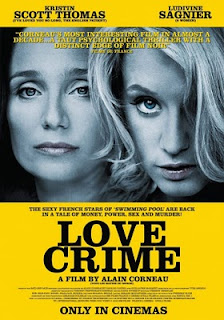 Every nuance makes you not trust anyone in any corporate office. There is enough tension to keep you squirming in the office chair. Sometimes we think we know who the plotter is and who will be the victim, and at other times you’re not so sure. Like an Alfred Hitchcock movie – this story is executed like a fine tuned piano.

This film is about dying and greed. Oddly enough, the French director Corneau Alain died a week after the premiere of his last movie.

The pace is a little slow at times but you would expect that in a movie that hangs on to dark secrets. There is no doubt about it – Love Crime is a high-class thriller, starring Christine Scott Thomas.

(((Lee Hartgrave has contributed many articles to the San Francisco Chronicle Sunday Datebook Section  and produced a long-running Arts Segment on PBS KQED. An original founder of the Bay Area Critics Circle and Two Term President)))