ONCE IN A LIFETIME BRINGS AMAZING HOLLYWOOD FLAVOR TO A.C.T.

A.C.T’S production of ‘Once in a Lifetime’ is dazzling. The show is like getting on a Hollywood treadmill that won’t let you get off. Wonderful dialogue sparkles among the brilliant sets and sensational acting. Oh, if only I could have been there in those days.

A.C.T has spared nothing to bring back 1920’s – 30’s Hollywood when Gossip Columnists ruled the day. For instance, there is the hilarious take on Gossip’s like Louella Parsons and Hedda Hopper. And no one could do it better than Rene Augesen as she  plays Gossip Monger Helen Hobart. She really nailed the role. Brilliant!

This is majestic staging. It’s pure Hollywood magic. Visually, there has been nothing better on the stage this year. The razor sharp actors really keep us laughing. No fear of falling asleep during “Lifetime.” This historical play by Moss Hart and George S. Kaufman is pure genius.

The wow performances in the show open fast and never slows down – and there is even a wonderful comfy train that goes by. Sure would like to be on that train.

There is so much to get excited about in this farce about romance and comedy – to eye popping exotic Art Deco scenery. And best of all, are the Actors that bring tons of wit and energy to the stage. Do you get the feeling that I love the show?

Director Mark Rucker has sent us to Hollywood in this engaging, glamorous play.
Also on the stage are wonderful old Movie Clips that were made just as ‘Talkies’ came about. Those were the days of Al Jolson -- one of the first to be in a Talkie Movie.

This is THE stage play of the year. Believe me – it’s as ‘Good as it gets!’ No wonder it’s called “Once in a Lifetime!”

Briefly the story: Silent films were on their way out. The ‘Talkies’ took over in the 30’s. A Trio of Vaudeville Actors sell their act for just $500 bucks, and they take a Train to Hollywood with Ideas of opening a school for voice training. Period Film clips are incorporated on a big screen to show us what the Hollywood product looked like in those days. And it was lots of fun.

Historical fact: Jack Oakie was the star in the movie (1932). It was long considered a lost movie, but was rediscovered a few years back and appeared on KQED. It would be great to see it again. 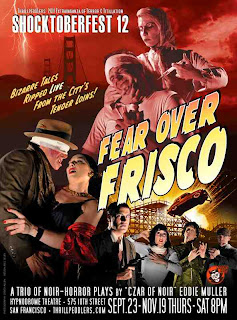