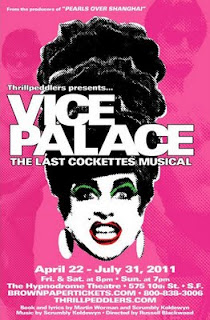 VICE PALACE – LAST COCKETTES MUSICAL
The Beauty of “Vice Palace – The Last Cockettes musical" is that it is not just only hilarious -- but Russell Blackwood and the rest of the talented cast has created a work of Art with dreamy sequences that show humans as mere mortals – that are reduced to a primitive level. This is it Darling – it’s like watching an Andy Warhol superstar. You could say that it is twisted and insane – and you would right.
Hey, how can you miss with this show? Its raucous comedy with beautiful mood lighting, delightful singing and dancing (some in the nude or mostly nude). Oh, Oh – that perked you up – didn’t it? Yep – this is the greatest movie never sold. Who knows? – it could become a movie one day. But, if it does – I insist that they use this Cast: Russell Blackwood, Leigh Crow – Flynn Demarco – Joshua Devore – Anne Fensod – TJ Buswell – Ste Fishell – L. Ron Hubby – Scrumbly Koldwyn - Laura Le Bleu – Steven Satyricon – Fennel Skellyman – Tina Sogliuzzo – Bonni Suval – Jim Toczyl – Birdie-Bob Watt – Eric Tyson Wertz and Tony Wichowski. For the movie of course, they will have to have a name that will fit on a marquee.
The musical extravaganza is loosely based on Edgar Allen Poe’s “Masque of the Red Death.” The Thrillpeddlers has given us a diabolically clever show that is super funny. If ‘Bizarre’ were an Ice Cream – I would be eating tubs of it.
The last time for this show was the last time that the original Cockettes put on the show. Now -- the Thrillpeddlers has brought out a totally newly refreshed and thrilling groundbreaking ballsy musical thriller.
The setting takes place in Italy a long, long, long time ago. Well, actually – it was 1960. Act II takes place, later on. The music is by Richard Scrumbly” Koldewyn (yes, that’s really his name). Lyrics by Martin Worman & Richard “Scrumbly” Koldewyn.  There -- said it twice – just to make sure that I didn’t misspell it. Director Russell Blackwood gave this show much “Flash and Dash.” Maybe he was a pirate at some time in his life. But I know one thing -- no one puts on a show with more vibrant visuals with blood soaked bad-asses. “Vice Palace” is an instant classic!
Note: Originally produced by Sebastian and directed by Donald Ward. The star was then was “Divine”.
At the Hippnodrome at 510 10th St. SF, CA.
www.thrillpeddlers.com.
RATING: FOUR GLASSES OF CHAMPAGNE!!!! (highest rating) –trademarked-
P.S. They sell the Popcorn There.
(((Lee Hartgrave has contributed many articles to the San Francisco Chronicle Sunday Datebook and produced a long-running Arts Segment on PBS-KQED)))
Posted by Unknown at Monday, May 02, 2011