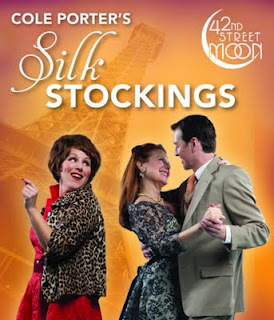 SEXY SPRING FUN IS BACK in the limelight at 42nd Street Moon Theatre. “Silk Stockings is seldom performed today – and that is a shame. Its High Society mixes it up with Stalin’s Russia. The words and music by the legendary Cole Porter tunes make the show very memorable. You’ll really enjoy the tantalizing twists and crackling dialogue. Here is a short list of some of the legendry songs: “Stereophonic Sound”, “All of You” and “To Think That This Could Happen To Me”. The musical skillfully mixes tongue in cheek comedy with romance and cultural differences. And you know what? – You’ll leave with a little Russian glow. Yes, they do have a sense of humor.
“Silk Stockings” is easily one of the best comedies ever made. The writing is exciting and very clever. And it sure has stood the test of time. The musical swirls around Greta (Soviet Agent) who is seduced by Western materialism and a dashing PR Agent. All though written for another era – it is not dated. The same politics in the world are still on the main stage. Stalin is lampooned and well as American Stereotypes. The fast paced script and the extremely truly witty actors almost don’t have to say much to make us laugh. They have it all in their faces – from deadpan to defensive posturing.
It’s a huge cast and each one should be nominated for a Tony – if we had Tony’s here. But in my book – they deserve it. Here they are: Bill Olson, Jonathan Shue, Annie Donahey, Hannah Knapp, Daniel Epstein, Jeremy Vik, Michael Rhone, Jackson Davis, Ian Simpson, Nancy Dobbs Owen, Corinne Proctor, Hannah Knapp, Ray Renati, Lee Ann Payne and Dyan McBride.
The Musicians make the music sound like it’s a full Orchestra: They are Dave Dobrusky and Nick DiScala. The Dance Captain Nancy Dobbs Owen keeps the pleasant surprises going. Superb directing by Greg MacKellan has again made another ‘treasure’ shine just like he found an old trunk full of jewels.
AT THE 42ND STREET MOON THEATRE
Rating: Three Glasses of Champagne!!! – trademarked-
(((Lee Hartgrave has contributed many articles to the San Francisco Chronicle Sunday Datebook and Produced and hosted a long-running Arts Segment on PBS KQED)))
Posted by Unknown at Monday, May 09, 2011