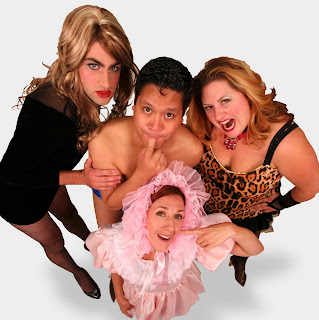 JERRY SPRINGER THE OPERA
HILARIOUSLY SHOCKING
I counted several hundred uses of the word F%*k. All in all there are several words that could be considered obscenities. But, hey – everyone uses them anyway. And they are so much more vivid when sung in Opera Style.
The Opera is based on the popular Chicago Talk Show – “The Jerry Springer show. "And, just like the T.V. program – the Opera has dueling couples swearing at each other and security has to keep them from throwing the chairs at each other. Sure, it’s Trailer Trash - and that’s what I love about it. How often do you get to hear an Opera sung by Jesus, Mary and the Devil?
We even get to visit hell with the sufferers singing in Wagnerian style. In this show you get hints of Phantom of the Opera, Evita and Les Miz. The singing is ‘FanOperaBitch.’ The language is bound to stir some controversy, but this audience relished every little ‘nasty’. They seemed to love making light of ALL religions, plus the Ku Klux Klan.  No one is safe.
Some people may be offended with the obscenities, profanity and blasphemy – but if you are the fluffy, tender type – then my advice would be for you to stay home. In fact it even says in the program: “Jerry Springer, The Opera” is intended for mature audiences only. It is controversial material, written to shock and challenge your perceptions. If you’re upset, or offended by the content -- we’re sorry, but no refunds will be provided. If you choose to exit the theatre, please be respectful of those who have a sense of humor.” – Ray of Light Theatre.
Some of the songs may make you squirm like “Diaper Man” – On the Springer show, he sings about how he loves to have someone wipe his rear. “I Just Wanna Dance” reminds of an Opera ‘Chorus Line’.  You know what?  This huge cast (over 40 actors/singers) is just like a Broadway Quality show. Better in my mind – than Mel Brook’s “The Producers”.
Not surprisingly – there were probably many Christians in the audience. Of course, these are the educated ones that know humor when they see it.  Satan – “The Prince of Darkness” has that mysterious Phantom look. He is mesmerizing. Jesus sings to Satan – “Actually, ‘I’m a little bit gay’.
This is possibly one of the best shows to come to San Francisco. It was once set to open at the Orpheum Theatre as part of “Best of Broadway”  – but was cancelled for some reason. There is no doubt about it. Jerry’s Opera is original, and provocative. It’s definitely Grand Opera with some hard-ass lyrics.  And yes – you will hear rhythmic chanting of the F- Word.  You may see it differently – but I see a brilliant work of Art.  It is first-rate, imaginative and brilliantly performed. Oh, by the way – the Opera singing is right up there with all the Opera Diva’s in the world.
Here are a couple of fun things – that I loved, but you might hate: “Chick with a Dick!” “F-you. F-you Back” “ “Who you calling Asshole, you Asshole.” These are what you hear as Springer interviews his guests on T.V. On the actual Springer T.V. show they deleted those words – but we knew what that were saying anyway.  Then – all of a sudden we get the “Dancing, singing ‘Ku Klux Klan.” And – someone sings about “Mary” – “She’s a teen-age whore.”
Oh S#*T – I’ve run out of time.  But, I’m warning you – “You gotta see this Brilliant, adroit, inspired and joyous musical!
There is so much great talent in this show. Wish I could fit them all in. Here are some: Patrick Michael Dukeman, Keith Haddock, Bill Tankovich, Tom Farris, Tracy Camp, Rebecca Pingree, Jessica coker, Jordan Best, Johnathan Reisfeld (Satan) Chris Yorro (Jesus) Manuel Caneri, Timitio Atusio and J. Conrad Frank.  Boy – what a powerhouse of Talents.  INCREDIBLE!
Direction by M. Graham Smith is Fantastic.
AT THE VICTORIA THEATRE
Tix:  http://www.jerry.com/
RATING: FOUR GLASSES OF CHAMPAGNE!!!! (highest rating) –trademarked-
(((Lee Hartgrave has contributed many articles to the San Francisco Chronicle Sunday Datebook and produced and hosted a long-running Årts Segment on PBS KQED)))
NOTE: THIS REVIEW IS AN ADVANCE REVIEW COURTESY OF
www.beyondchron.org.  It will be available on Friday the 17th on beyondchron.
Posted by Unknown at Monday, September 13, 2010