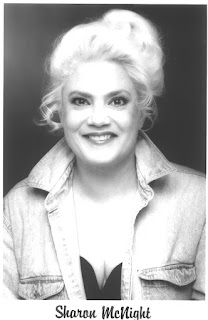 SHARON McNIGHT AT THE RRAZZ ROOM

There is something electric when you see a McNight Show. Sharon knows how to twist and turn each song to make them her own. Some of them pull at your heartstrings, and others give you so much energy that you have the feeling that you should get up, clap and have a real dandy show. Well – that’s exactly what Sharon always does.

McNight is out to bring to you, unique material – and an evolution of entertainment. She takes standards and makes them sound like they came in from the Clouds. No, not the “Apple” cloud. What you get is never ending shtick and music. A lot of it of course is American – but there are also songs from the French and other Countries.

Sharon gives us that famous growl as she brings to life again gutsy renditions of famous and not so famous songs. Hey, you know what? Sharon has a real knack to flush out the cream of the crop. She goes the Extra Mile.

In this evenings set – it’s all about men. And this show certainly should drag in a lot of men. The songs range from “Spicy” to Love and beyond – if you get my drift. Oh hey, that’s what she’sez. And she knows how to win over the boys. It’s typical McNight.

Not only does Sharon shine with the music – she also is a very talented comedian. Here’s one that brought out a lot of laughs: “ I Like Kids, especially if they are 24 years olds!” I loved this: Sharon says laughingly: “Bet you’ve never seen a woman do Bette Davis?” I’ll explain. Usually it's a Drag Star does bits on Davis.  It's rare when a women impersonates the famous snarling Star Bette Davis.

Back to the music. From Follies “Am I Losing my Mind?” – Made my socks roll up and down. Sharon is always a ‘Hoot’ and this show is so energetic and magnetic – so much so that you won’t be able to resist the magnetism. Sharon talks about the Beach Boys and her friend “Chris”. Chris sang some wonderful music with Sharon. Paired together they added even more magic to this show. The famous piano player Joan Edger (she played many years with Charles Pierce) still plays wonderfully and looks terrific. Chris and Sharon were both in the Musical 'Starmites' on Broadway. Sharon was a Tony nominee as best actress at the Tony awards.

I’ll leave you with these little tidbits (things I did not know) – Willie Nelson wrote the song ‘Crazy’. “No one else wrote it" – Sharon says. "And – When you see on a record 'Written by Elvis Presley' – Sharon says: “Elvis never wrote a note in his life.” See – you never know where you get the News! Try the Rrazz Room in the Hotel Nikko.You're gonna love this show!

GREEN DAY HAS THE WATTS!

SCROLL DOWN FOR BEN VEREEN REVIEW
The Musical Hair is calming. “American Idiot” - Not so calming! In the Hair days, we thought the music was way too loud. Now -  “American Idiot” came along with it's Thousand Watts of Electricity. "Hair" used few Watts. Never in your lifetime will you see so many things lighting up on the Walls, Ceilings, along with various devices that light up all over the stage. There are cameras buzzing around everywhere - and Televisions that multiply by the hundreds. We get to read messages in the many T.V. Sets. Yes this evening is both a powerful and  sometimes somber evening. That can be good and bad. They music is pretty repetitive, much like the song that they just sang. But, that is what they do these days. Every pop singer usually sings the same lyric over and over. Yeh, O.K. we get the point.

Now this is a puzzle. There is much to like about the show. It has expert timing, great visuals and terrific singers. However, the brooding young people are just never satisfied about anything. They are handsome men and girls that just don’t seem to care about all that. One young man tries to free himself from the drugs, sex and just laziness from himself. Another young guy – forgets all the time to take a bath, but he still makes love with his girl. He trys to clean up his act by putting on a shirt and tie. Then he washes up, and gets an office job that lasted about 10 minutes. This Job was not for him, or any job. He went back to his world of wishing for things instead of actually trying to make a life for himself.

The musicians do deliver some serious scores and the ‘High Wire” acts will really astound you. There are eye-popping colors everywhere that you look. It sure is cinematic. But I don’t see it as a literary delight.

Briefly the story is about some young men and women who try to make some meaning out of their lives. Well, that’s easy – put away the drugs. The punk Rock band (Green Day) influenced this show with blasting musical numbers. They are catchy and effective – but like all modern music, the tunes have an annoying way of sounding the same.

One of the songs says: “You Can’t Go Home Again”. Well, sometimes that is true – but moaning about your self will not get you anywhere. Maybe the psychedelic story will be very interesting to many – but your eyes can only cross so many times.

Look, here’s the Deal. This is a show that is talented to the ends of the Earth. The boys drop their pants and show their tempting tight shorts (that you’ll like) -- and they simulate sexual moments. Or as they call it, Punk Rock! At times the show is Poetic, Provocative and beautiful, in a pulse beating way.

Music by Green Day. Lyrics by Billie Joe Armstrong. Book by Billie Joe Armstrong and Michael Mayer.
These Great Actors and singers are: Van Hughes, Jake Epstein, Scott J. Campbell, Leslie McDonel, Gabrielle McClinton, Joshua Kobak and Nicci Claspell. Also the Ensemble is essential to the show. They are very necessary to keep the drama going. And without the masterful Band – it would not be a very interesting “Day”.

NOW PLAYING AT THE ORPHEUM THEATRE