PIA ZADORA -- AT THE RRAZZ ROOM 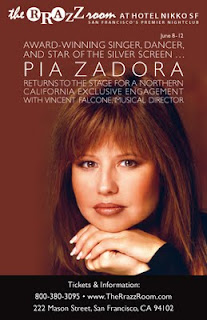 Pia Zadora has been in films (as a young Martian girl). She won a Golden Globe as 1982’s “Most promising New Star”. She also won the Golden Globe for “New Star” for the film Butterfly. The singer/actress gained even more fame in a memorable role in John Waters’ Hairspray – she played the role of a beatnik. It is said that Waters admired her work. Later, he interviewed Zadora.
Then Zadora captured a whole new audience with a successful singing career. No stranger to San Francisco – she played the San Francisco Symphony Hall in a sold out performance. She has received Five Stars ***** for her best selling CD “I Am What I Am”.  If you haven’t heard it before, I’m sure that you will appreciate the wonderful quality of her musical stylings. Pia is all about the great standards. If you like quality, time tested music – then you will really enjoy the wonderful quality and vocal interpretations of the really ‘Golden Age’ of music.
Zadora draws on the immortal music of Gershwin, Styne, Cahn, Ellington, Herman and Rodgers and Hart. She brings to the stage fresh new ways to these fabulous classic tunes.
As I recall from her Symphony Hall performance she delivered deft, affectionate intonations to the Great American Songbook. I'm looking forward to seeing her on the Rrazz Room Stage at the Hotel Nikko. Oh, and did I mention? She has considerable charm.
www.therrazzroom.com. Tonight at 8pm. (June 8th - June 12th)
(((Lee Hartgrave has contributed many articles to the San Francisco Chronicle Sunday Datebook and Produced and Hosted a long-running Arts Segment on PBS KQED)))
Posted by Unknown at Tuesday, June 07, 2011