MILLS BROTHERS ARE MILLS-TASTIC! AT THE RRAZZ ROOM 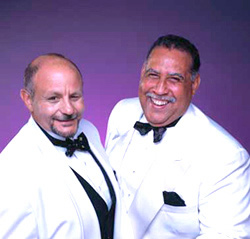 THE MILLS BROTHERS – MILLS-TASTIC
I’ve been in the Entertainment Business for more years that I care to mention.  As a Disc Jockey in Chicago, Gary Indiana, San Francisco (Radio, TV) I played many, many Mills Brothers songs. Now the Mills Brothers are still going strong on stages around the World. And guess where they will be on April 30? – At the Rrazz Room. Donald Mills was the last of the Brothers, but the talent goes on with family members.
Their original hits “St. Louis Blues” and “Bugle Call Rag” were some of the Mills Brothers early hits. In 1943 they sent the airwaves into a tizzy with “Paper Doll” – a wonderful sweet ballad that became a huge hit. And who could forget the ever-new sounding “You’ll Always Hurt the One You Love.” And – ain’t that the truth?
Ask anyone – or most anyone -- what they think of the Mills Brothers, and they will say that they surely are one of the greatest, influential jazz vocal groups of all time. They are particularly amazing on songs like “You’re Nobody Till Somebody Loves You” and “Bye Bye Blackbird.” The Brothers said: “Those ARE really great songs and we might do some of them at the Rrazz Room – but we haven’t really decided on the final set for the show yet.” Hey, maybe they’ll even toss in “Lazy River”.
The Mills Brothers history goes back at least 50 years. There has been a movie about them (The Mills Brothers Story) it’s available on DVD. Get ready – cause a performance by the “Mills” is totally engrossing. The ‘Brothers’ recorded mostly on Decca Records, where I met them when I did PR for Decca Records. They were moved to “Dot” records – and had the big hit “Get A Job” – a song that had a lot of doo-wop sounds in it. We are amazingly lucky that the younger generation (John Mills, the second) is continuing to bring this great music to the world. With him on the stage is Elmer Hooper of the famed ‘Platters’.  Can’t wait to hear these great talents in person again.
WHEN: APRIL 30 (Sat) 3pm) and May 1st – Sunday - 3pm, 8pm.
http://www.therrazzroom.com/.
Posted by Unknown at Friday, April 29, 2011