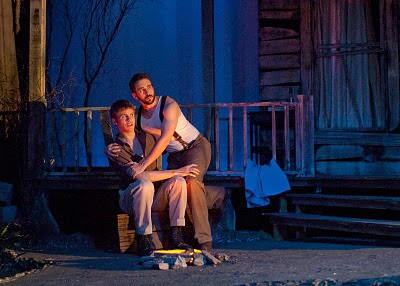 LEE HARTGRAVE REVIEWS
THE SUGAR WITCH – WILL BEWITCH YOU
You know what? The Sugar Witch has that same tragic and haunting feeling that I got when I saw Scorsese’s movie “Shutter Island”.
The action takes place in the deep swamps of Florida. The trees have that strange hanging moss and there are horrible sounds in the night. Hey – I’m ready to leave already and nothing has really happened yet.
The first act is really sensational as the cast glides between humor and tragedy. The Bean family was once a prominent family. Old man Bean was a powerful source in the town. But, he’s dead now – and he has left many secrets behind. The Bean house is in shambles. If the wind blows too hard it might fall like a deck of cards.
All that is left of the Bean family is young Moses (his son), played by Michael Phillis. His warm and open personality has to deal with a lot of stuff around that house. His sister (A.J. Davenport) is ‘not quiet right’. But, may be more cunning that you think. Out of the forest one day – a pretty little Lass --(Amelia Mulkey) skips into the yard and asks to see Moses. Well, he’s not there – but she is smitten by him -- and insists on waiting for him. And who wouldn’t be? However Moses has no feeling for her, and tries to discourage her.
Then there is Kendra Owens (Annabelle) who practices Witchcraft. She says that the house is haunted. And if it were me in the place – I would turn tail and leave as fast as I could. Cause it sure looks and sounds haunted to me. Annabelle, who worked for Old Man Bean and has remained, says: “Those sounds you hear – they are flying cats.” They sure sound like it to me. I kept checking my shoulders to make sure that one didn’t land on me. Annabelle is an African American Women. And she knows where and when to spread salt around the house to discourage the evil spirits. But is it working?
The first act is dazzlingly written. In spite of the poor living conditions it becomes a spiky and insightful comedy, with an underlying darkness that gets darker as it goes along.
In the second act – the play gets downright spooky and dangerous. There is a lot that happens in that act and no hokey poky voodoo is going to chase those ghosts away. Some bad things happen – and I mean REALLY bad things. The flying bats get more restless and there is blood to clean up. Secrets come out about Annabelle and Moses – really surprising stuff.
The actors fire on all cylinders. Also what is suspected in the first Act, verifies it in the second act. You will suspect and be right that there is an attraction between young Moses and Hank (William Glammona). Both men are attracted to each other like fireflies in the night. Sitting by the outdoor fireplace they literally glow.  Think of Paul Newman without his shirt – and you get the picture.
There are more surprises. The young pretty girl who has a hankering for Moses has disappeared, and her Granddaddy (Jay Smith) comes a calling at the Bean residence. He suspects something and threatens to get the police.
Nathan Sanders is a grab-you-by-the-nuts playwright. The audience actually screamed with laughter in the first act – and slunk down in their seats in the second. Not because they didn’t like it. They were scared.
This is probably the best cast that I seen at NCTC this season. Dennis Lickteig, the director got it all right. Just one little suggestion – the 2nd act could by speeded up just a tad.
RATING: FOUR GLASSES OF CHAMPAGNE!!!! (highest rating) – trademarked-
ÅT THE NEW CONSERVATORY THEATRE CENTER
(((Lee Hartgrave has contributed many articles to the San Francisco Chronicle Sunday Datebook and produced a long-running Arts Segment on PBS KQED)))
LEE’S MUSINGS: So, “Hurt Locker” won over “Avatar”. I’m glad. It won both ‘Best Director” and “Best Picture” that doesn’t happen often. And this is the first time a woman has won as best director. I guess we won’t be hearing her ex-hubby saying “I’m King of the Hill” – will we?
Buzzin is getting a little tired of the weirdness of George Clooney. Could all that nice guy stuff just be fake?
Item No 2: No that doesn’t mean go to the bathroom. I got this notice from twittergrader.com. My rank is 1,527,978.000. I’m graded at 76 out of 100. Check it out on twittergrader. Fascinating – this Internet stuff.
FOLLOW LEE: http://www.twitter.com/leehartgrave
http://www.facebook.com/leehartgrave
http://www.beyondchron.org/
Posted by Unknown at Sunday, March 07, 2010