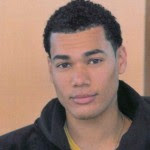 O.K. HERE’S MY ADVICE. JUST ROUGH RIDE THIS ONE.  Cause, this is not Boy Scout stuff. You know the story of Oedipus. His father practically throws him away after damaging the boy’s feet – however, the boy grows up and becomes a streetwise kid, who angles to be a King.

Along the way there is a lot of bloodletting, Breast Baring and total nudity. The would be King (he is 17) meets an older woman. He has a hankering for her.  He seduces her -- not aware that he was mounting his own mother. She may suspect that he is her son, but she doesn’t try to stop him. Sizzle! Sizzle!

In the background is the most interesting Guitar music and variations that you will ever hear. The throbbing of the music almost drives you to incitement. Check them out at (http://www.verybecareful.com/)

In this whirlwind of a play the temperature rises along with writhing limbs and heaving breasts (female and male. Fans anyone? This re-imagined Greek Classic (now Latino) is not for the easily shocked. No, this is hard hitting stuff that is knarly and macho. Would be Kings jangle ‘their’ things between their legs to get to be the top man.

I have to say that this is the most realistic play that I have ever seen in my long Career of reviewing. Lewis Alfaro, the playwright has just made hip-hop mainstream. The streets have never felt so threatening as the struggle for supremacy makes veins in arms almost ready to pop out.

Shirts are thrown on the ground. No, it’s not Laundry Time. It’s show-off time. And, they have plenty to show. Hey, even great actors have to give the people what they want. This cast of Actors are “Absolutely the most terrific actors in the world. "That is fact and not fiction!”

THE PLAYERS ARE: JOSHUA TORREZ (Oedipus) is the best actor of the year – he’s Riveting! ROMI DIAS (Jocasta) Oedipus’s Mom is unforgettable! Carlos Aguirre, Eric Aviles, Marc David Pinate and Armando Rodriquez -- are all in the (Coro) – The Chorus. But, they are so much more. They act, they threaten, the set the tone of the play. And they certainly make it the dazzling spectacular triumph that it is.

Loretta Greco’s Direction is fabulous. She brings out the Raw and Riveting performances “that make this an experience you won’t soon forget!”

I plan to see it again!

AT THE MAGIC THEATRE www.leehartgrave.net